Nebraska’s Daughter HIKE Coordinator, Rachel Radloff, has been hard at work this year. Her motivation likely comes because she is a HIKE recipient who received her first hearing aids with assistance from a HIKE grant when she was in Kindergarten. She is now 13 years old and serves as Guide in Bethel #1, Papillion. 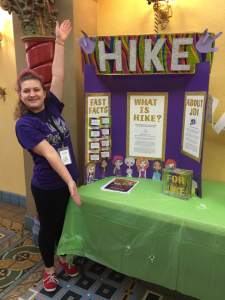 Rachel has coordinated with Omaha’s children’s theater to have a HIKE display at all of their performances that are translated into ASL throughout the season. Her Job’s Daughter sisters also serve as ushers for these performances, and the theater has permitted Rachel to do a curtain speech about HIKE and Job’s Daughters before the shows start. Job’s Daughters is given presence at 9 different shows throughout the year, in front of an audience of 900 people each time. Rachel is very excited and invites others to usher with her; she needs about 5-8 volunteers once a month.

She has organized two fundraising activities this fall that center on giving back to the community – a Halloween HIKE Party and a “HIKE on Ice” skating carnival. A local ice rink has donated an evening worth of time for the event. It will feature “cosmic” skating — black lights and glow-in-the-dark fun. Job’s Daughters will have off-ice games for people to participate in, and Rachel’s figure skating club will provide coaches and skating helpers for people on the ice, so that everyone from newbies to experienced skaters can join in the fun. Rachel has received several donations for door prizes, and the Omaha Big Brothers Big Sisters chapter has made it an official event for their members to attend. Rachel has also secured a TV interview her before the “HIKE on Ice” event. Through her audiologist at Boystown Hospital, their public relations director wants to coordinate to pitch her story as a feature to all the different media in town.
Way to go, Rachel, for your creative and amazing ways you are promoting HIKE for fundraising this year!
What is your state doing for HIKE this year? Share your stories with us and get featured on the HIKE website and social media.

This site uses Akismet to reduce spam. Learn how your comment data is processed.

Find us on Social Media